Feet don’t fail me now! Mardi Gras at Universal Orlando Resort has been underway now for about a month and it hasn’t disappointed yet!

This event is probably my second favorite theme park related event of the year (behind HHN). It is considered Florida’s biggest party and rightfully so as it is a great time. The parade is the most fun you will have at a theme park, watching it is one thing, but RIDING it is a totally different experience. Last year I think we rode on the floats 6 times?.. this year it’s only been 3, but it’s enough that one of the bead captains knows me and my husband by name. See float selfies below: 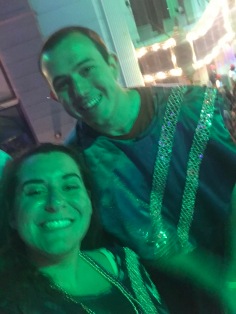 The floats this year are pretty awesome. 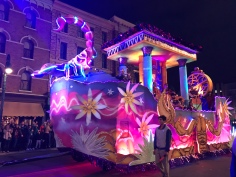 You can catch an absurd amount of beads that really no person needs, but it is fun. Just don’t stand across the way of a spot light because you will most likely get pelted in the face by beads.

The food at Mardi Gras is ok. The fried shrimp is my favorite, highly recommend. That’s all I really have to say about food. Sorry for the lack of reporting.

Last but not least, the concerts. I only saw two this year, one was horrible yet fun and the other was one of the best concerts I have ever seen. First was Sean Paul…. yep, Sean Paul. I remember so many of his songs from my middle/high school days. He was pretty awful, I couldn’t understand a word he was saying, well, other than ladies, Orlando, and Sean Paul. We danced anyway and made the best of the situation.

Mackelmore was the second concert we saw, and he did not disappoint. Man I loved that concert, I had THE best time. He played all of the right songs, he was extremely entertaining and he was super funny when he talked to the crowd. I liked this concert so much that I am strongly considering driving 1.5 hours to Tampa to see him in concert again. Here is everyones favorite, Thrift Shop in a horrible Instastory video. Enjoy!

That is about all I have to say about Mardi Gras. I highly recommend the event. You have until April 7th to catch it, plenty of time to make it there and catch some beads!

This site uses Akismet to reduce spam. Learn how your comment data is processed.